What is Ethylene Gas? – How it Affects Fruits and Vegetables 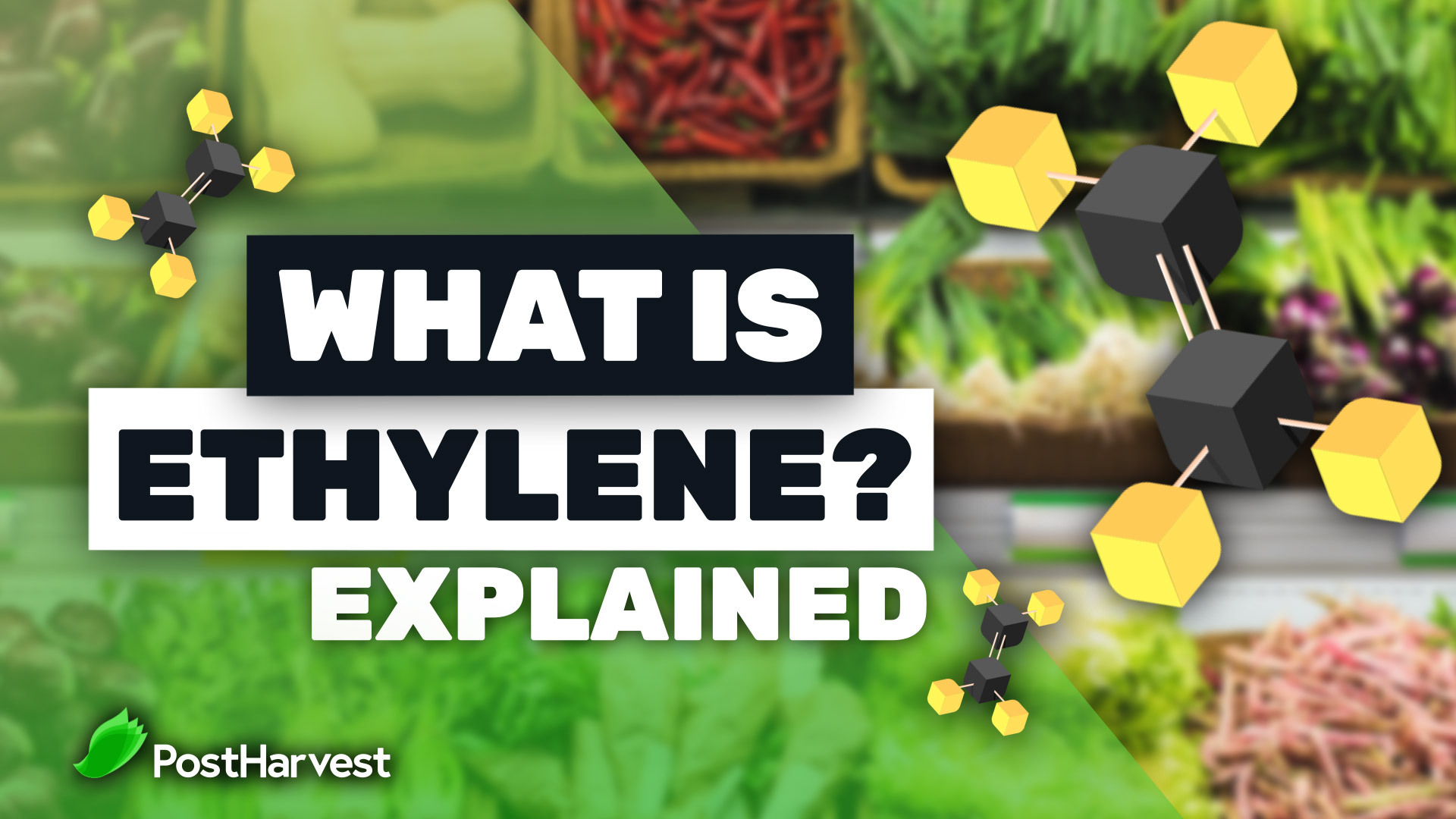 We’ve all at one point or another heard the idiom “One bad apple, ruins the bunch”, but not everyone knows that this particular saying is directly related to the effect that one overripe apple can have on the other apples, as it continues to emit ethylene into the surrounding atmosphere, accelerating the ripening and senescence of each other apple in the bunch as a result.

So, what exactly is ethylene and how is it being utilised to maximise the outgoings of fruits & vegetables across global supply chains?

Ethylene is the most commercially produced organic compound in the world and is used in many industrial applications. Some of these industrial applications for ethylene include; ethylene oxide for the sterilising of medical devices, polyethylene as a more durable plastic over polyvinyl chloride and polypropylene, ethylene glycol for creating polyester fibres in fabric, and many other applications but in this particular case, we’ll look at its use within the fresh produce industry.

A colourless and flammable gas, ethylene (C2H4) is a small hydrocarbon natural gas and a naturally occurring plant hormone produced by plant cells that aid in the ripening and ageing process of fresh products. Fruits such as apples, bananas, and pears emit a greater amount of ethylene gas, which as a result affects their ripening process. Other fruits, like cherries or blueberries, have very little ethylene production, therefore, it does not greatly impact the ripening process.

Ethylene is a hydrocarbon gas, with four hydrogen atoms bound to a pair of carbon atoms that are connected by a double bond.

What are its effects on Fruits and Vegetables?

While ethylene is invaluable due to its ability to initiate the ripening process in several fruits and vegetables, it can also be very harmful to many fruits, vegetables, flowers, and plant varieties by accelerating the ageing process and decreasing the product quality and shelf life. The degree of damage depends upon the concentration of ethylene, length of exposure time, and product temperature.

Fruits and vegetables play a vital role in human nutrition. One of the few factors that influence their economic value is the relatively short ripening period and reduced postharvest life they often have. Over-ripening of fruits and vegetables leads to excessive softening which results in spoilage and damage during shipping and handling.

Understanding the fundamental relationship between ethylene, ethylene producers, and respiration rates during fruit ripening is necessary in order to manage the harvesting, storage, and distribution processes.

When the chemical is exposed to fruits and vegetables, it latches onto their ethylene receptors and stimulates the maturing stages of the produce. The chemical reaction within fruits and vegetables then brings forth the development of flavours, vitamins, firmness, aroma, texture, and colour in the produce, not to mention the ability to naturally continue to produce ethylene.

However, too much ethylene exposure before shipments meet their required timelines and destinations, can lead to overripeness, a decline in product quality, and an increase in Volatile Organic Compounds (VOCs) throughout the stock.

One of the biggest contributors to mass amounts of waste within the fresh produce sector is directly linked to cases of overexposure to ethylene producers during the fruit ripening and storage process. On a global scale, the main contributor to food waste is fruits and vegetables with an astounding 45-50% of all harvested fresh products being lost or wasted within the food supply chain. This is roughly 1.3 billion tonnes of food, which equates to $680 Billion US Dollars of wasted fruits and vegetables each year.

The effects of ethylene on fruits & vegetables can be avoided or reduced by:

Other reactions to ethylene gas are a loss of chlorophyll, abortion of plant foliage and stems, shortening of stems, and bending of the stems (epinasty). Ethylene gas can be beneficial when used to hasten ripening fruit or detrimental when it yellows vegetables, damages buds, or causes abscission in ornamental specimens.

Conventional Practices are Harmful to Fruits and Vegetables

Any closed environment, such as truck trailers, shipping containers, warehouses, and cold rooms, will have a similar effect resulting in an increased concentration of ethylene.

At the latter part of post-harvest, artificial fruit ripening by using ethylene gas is a general practice as it ensures that the product reaches the retail outlets with a degree of ripeness, which brings out its best in terms of taste, colour, texture, and nutritional value. One of the most common examples is the ‘forced’ ripening of bananas during high-demand periods.

However, these conventional methods adopted by most warehouses and cold stores of lowering the temperature and humidity and using gases like nitrogen and sulphur increase the shelf life but have several drawbacks.

Refrigeration and humidity control slow decay but are not enough to halt the production of ethylene gas in cold stores and warehouses. Even a small amount of ethylene gas during storage is enough to hasten the process of decay of most fresh products. This makes ethylene control absolutely necessary in the cold chain.

Ethylene gas is an odourless, colourless gas that exists in nature and is triggered at maturity in climacteric fruits. Ethylene, also known as either the “death or ripening hormone”, plays a regulatory role in many processes of fruit & vegetable growth, development, and eventually decay.

Fruits are mostly either high ethylene producers or absorbers. Apples, bananas, melons, pears, and peaches are ethylene-producing fruits, while tomatoes are moderate ethylene-producing foods. Broccoli, cabbage, and cauliflower are just a few examples of ethylene-sensitive foods.

So, by the rule of thumb, it is preferable to avoid storing ethylene-producing fruits with ethylene absorbing ones. Ventilating the storage area also serves this purpose but just to an extent.

Commercial use of ethylene gas to ripen fruit

The overall effect of Ethylene gas is to hasten ripening, ageing, and eventually spoilage. Some examples of bad effects of ethylene gas on some common fruits and vegetables are; scald, brown spots, decay, sprouting, mould, odour, yellowing, bitterness, and loss of colour.

The presence of ethylene gas in amounts ranging from a few parts per billion (ppb) to a few parts per million (ppm) can reduce the vigour of fresh produce stock, decrease product life expectancy and reduce overall stock quality.

Climacteric fruits are frequently harvested at a physiological stage that is considered ‘commercial maturity’, typically in a hard green but mature stage just before ripening has initiated, examples include bananas, mangoes, tomatoes, and avocados.  This enables the fruit to be harvested, cooled, stored, and transported significant distances to where it will be marketed and consumed.

Ripening can then be conducted within cold storage, under conditions of temperature, relative humidity, and ethylene production to achieve uniform appearance and quality of ripe fruit. Unripe fruit is placed into specially constructed ripening rooms and brought to optimum fruit ripening temperature and humidity.

Then, depending on how ethylene-sensitive the particular fruits being stored are, they may require a high concentration of ethylene to be introduced, Bananas, as an example, require a certain level of exposure to ethylene in order to help de-green and mature the bananas to a market-ready level.

However, ethylene sensitive fruits ripen at a much faster rate, and may need to be placed within controlled atmosphere storage, as opposed to ripening rooms to make sure these highly sensitive products can prolong their life cycle for a longer period and in doing so have the fruits ripen and arrive at the grocery store at the most optimal time and condition.

Regardless of how ethylene sensitive a fruit or vegetable product may be, the process is still the same, requiring a prescribed amount of ethylene production to be introduced into the cold storage environment as a ripening agent via a “catalytic generator” that creates ethylene gas from liquid ethanol or from commercially available gas supplies.

Forced-air cooling systems ensure that fruit is uniformly exposed to the room ethylene concentration. When fruit is exposed to ethylene gas under these controlled conditions they will initiate their respiratory climacteric pattern and ripen at a relatively uniform rate. Conditions and duration can be varied to suit customer specifications for the stage of ripening and colour development.

Treatment times vary depending on conditioning and ripening stage required but once the fruit has reached the desired pulp temperature a treatment time of 24 hours with a room ethylene concentration of 10 microlitres to the litre (10 µL/L) is sufficient to stimulate coordinated ripening for many climacteric fruits.

As fruit respiration rates increase in response to ethylene action & treatment it is important to ventilate rooms to prevent the build-up of carbon dioxide emitted as fruits produce CO2 as a respiration by-product.

‘Ripe ‘n’ Ready’ is a retail strategy used for marketing climacteric fruits to consumers in a ready-to-eat state. Consumers are increasingly purchasing smaller quantities per shop, yet they are shopping more often.

Traditionally consumers would need to plan ahead when purchasing climacteric fruit in the early stages of ripening and wait for the fruit to ripen before consuming, otherwise resorting to using consumer-level techniques to introduce more ethylene gas to their leafy greens, citrus fruits, and other ethylene sensitive produce.

An example of consumer-level ripening may be to store fruits such as bananas, apples, or other ethylene-producing products, with an unripe avocado inside a paper bag to help produce ethylene levels that will ripen the avocado faster.

The Ripe ‘n’ Ready strategy is to pre-condition/ripen climacteric fruit to be able to present consumers with a ready-to-eat product and save them the hassle. Achieving this requires a synchronised supply chain that can ensure the timely delivery of common fruits after the ripening treatment has been applied.

Some new varieties of tomatoes are marketed as ‘vine-ripened’. Certain truss tomatoes develop their colour and flavour while still attached to the plant.  They have been developed through crossbreeding with non-ripening tomato varieties and are usually grown hydroponically in greenhouses.

Monitoring and controlling the ripening of fresh produce is becoming a very important issue in the fruit and vegetable industry since the state of ripeness during pre-harvest, harvest, storage, and market distribution determines the quality of the final product measured in terms of customer satisfaction.

Many methods to monitor ethylene and the maturity of fruits and vegetables have already been proposed. The main disadvantage of the majority of these common examples of techniques is that they are not practical in a sustainable sense for cultivars or storage stations. Moreover, most methods are invasive and require the destruction of say bananas or apples as test samples used for analysis.

This is why, nowadays, optimal harvest dates and predictions of storage life are mainly based on practical experience. Leaving these critical decisions to subjective interpretation implies that large quantities of fruit are harvested too soon or too late and reach consumer markets in poor condition.

PostHarvest has developed a form of sensor technology, which allows users to accurately measure and forecast optimal delivery times, maximise outgoings and minimise food wastage. PostHarvest’s amplification technology allows for atmospheric reads in the form of parts per billion (PPB), this measurement is often used to describe amounts of ethylene and contaminants found within an atmosphere in its most precise and finite form (currently an unmatched industry standard).

PostHarvest’s Environmental Sensor is a wall-mounted device that sits within storage facilities as it continuously captures ethylene samples, along with other chemical compounds from within the controlled atmosphere of a cold chain operation, providing the most accurate product health readings in the industry. This data provides conditioning & health reports to help cool store operators forecast their processes, supplies, and optimal delivery times, maximising outgoings and minimising food wastage as a result.

If you would like to know more about ethylene and its relationship to fruits and vegetables, go to PostHarvest’s free online learning platform. 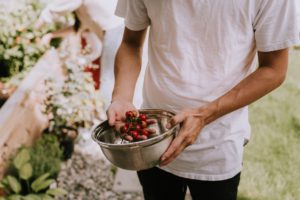 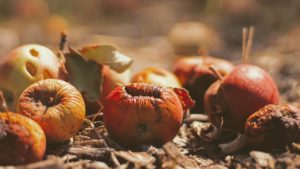 The Top Food Loss and Waste Statistics of 2022